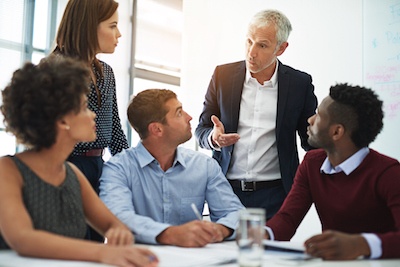 The competition to attract and retain the best talent possible is fierce and global — in every industry, and for businesses of all sizes.

Companies need to consider every angle to recruit and retain employees.

That’s just one more way an ESOP can help lend businesses a competitive advantage: An ESOP is a qualified retirement plan.

Most employers are already well-acquainted with 401(k) retirement plans. Some business owners may wonder about the relative value of an ESOP vs. a 401(k) match.

So, what’s the difference between a 401(k) plan and an ESOP, when it comes to qualified retirement plans?

It’s important for business owners considering ESOP as an exit strategy to also consider the value of ESOP vs. 401(k) qualified retirement plans, and how businesses can add an attractive benefit to their compensation plans when they become ESOP companies.

ESOP stands for Employee Stock Ownership Plan. An ESOP is a qualified retirement plan that can be used as a business transition tool — and as an employee ownership vehicle. That second part is the important part of this exploration.

An employee stock ownership plan (ESOP) is an IRS qualified retirement plan — similar to a 401(K) plan — that buys, holds, and sells company stock, providing employees with an ownership stake in the company, as well as an additional form of compensation directly linked to success of the company.

Is an ESOP right for you? Take the Quiz.

You can get a deeper understanding, and evaluate whether an ESOP may be the best fit for your organization.

What is the difference between 401(k) and ESOP?

ESOPs and 401(k) plans are both tax-deferred retirement plans that are funded by pre-tax contributions.

One important distinction between 401(k) matching plans and ESOP benefits is this: While 401(k) retirement accounts that include a match are funded with employer and employee contributions, most ESOPs are funded exclusively with company contributions. This means that most ESOPs are provided by the company at no cost to employees.

That’s right. Employees are allotted the value of shares in the ESOP company over time, according to the company’s vesting schedule — not by setting aside funds from their salaries or wages.

This adds a valuable employee retirement benefit to an ESOP’s compensation offerings, creating a powerful recruiting and retention tool. In fact, according to a recent employer survey by the National Center for Employee Ownership, ESOPs experienced significantly lower employee turnover than the national average.

While 401(k) plans are invested in stocks, bonds, and other investments, ESOPs are the only retirement plan that is allowed to be primarily invested in employer securities of the company.

While 401(k) Plan account values are generally updated on a daily basis based on the results of the stock market, ESOP account values are generally updated once per year. This is because most ESOPs own privately held stock. Since there is not a stock market for privately held stock, the ESOP trustee has to obtain a valuation from an independent appraiser once per year. This may reduce the effect of volatility on employees’ ESOP retirement plans.

It also helps demonstrate to employees that the company’s performance impacts their share allotments’ valuations — which may be a powerful motivator for employee performance.

Check out this brief animated video to learn more about ESOPs. An ESOP is a valuable business transition tool for owners who wish to plan their exit while retaining company control and leadership. It’s also an attractive employee ownership vehicle and qualified retirement plan, affording employee retirement benefits that may often be more equitably distributed than other types of retirement plans. But is an ESOP right for your company?

Every business is unique, and you can start your evaluation and exploration with our free quiz, Is an ESOP Right for Your Company?