How Does a Leveraged ESOP Work? Here's All You Need to Know

Many owners of small to midsize businesses have all or nearly all their wealth tied up in their company. As they near retirement and want to diversify their investments, or experience other reasons for needing liquidity, they may explore options for selling some or all of their ownership stake in the business.

Owners who pursue an ESOP recognize the substantial benefits and advantages an ESOP can create, both for themselves and for the business, such as:

Unlike other qualified retirement plans, an ESOP is allowed to borrow money. An ESOP uses the borrowed funds used to pay the seller when it purchases shares of company stock.

Since ESOPs may be leveraged or non-leveraged, the question arises: What is the difference between a non-leveraged and a leveraged ESOP transaction, and why would a seller and/or company choose one over the other?

In the simplest terms, in a leveraged ESOP, the ESOP trust leverages a loan financed by a lender, most often a bank, for the purchase of company shares from the business owner (or shareholders) at the initial transaction, and/or from the company in subsequent years.

The ESOP-owned company stock is the loan collateral — so the sponsoring company guarantees the loan.

The principal and interest of the loan taken by the ESOP trust and guaranteed by the ESOP-owned company to fund the purchase of stock are income tax-deductible (within regulatory limits).

Funds contributed to the ESOP can be held in cash for up to two years before the ESOP is required to use that cash to purchase stock from the seller. This is because the main mission of an ESOP, as required by law, is to invest primarily in employer stock. If the ESOP does not use the cash to purchase stock from the seller within the time limits, the funds would be required to be invested in a non-ESOP retirement plan.

The ESOP-owned company makes annual contributions to the ESOP trust that are equal in value to the principal plus interest on the loan. The ESOP trust uses those funds for its loan payment.

As annual payments are received, the lender releases shares equivalent in value. The ESOP trust, in turn, allocates the released shares to the accounts of plan participants, following provisions stipulated in the ESOP’s plan documents. 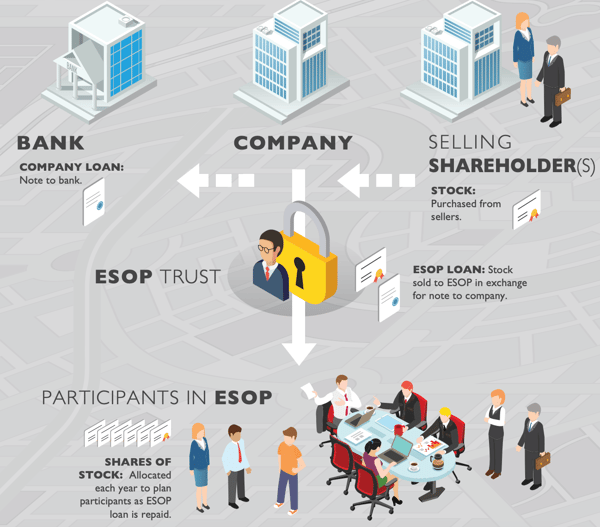 A non-leveraged ESOP does not borrow to buy shares, whether from the seller at the initial ESOP transaction, or when repurchasing from employees at distribution. The company pays the seller directly at the time of the initial sale transaction.

Annually, the non-leveraged ESOP company contributes shares or cash to the ESOP. At distribution, the ESOP trust repurchases employee stock from vested employees without borrowing money from a lender.

When the ESOP-owned company makes its annual contribution to the ESOP, the company benefits from an income tax deduction equivalent to the contributions, subject to IRS limits.

Leveraged or Non-Leveraged ESOP: Which is the Better Choice?

The decision whether to pursue a leveraged or non-leveraged ESOP depends on the unique combination of needs of all parties involved: the seller, the company, and the prospective employee-owners.

A company that doesn’t have the cash on hand to finance the transaction would simply need to use leverage to make the ESOP transition. Factors that would influence this decision include:

ESOPs Can Flex From Leveraged to Non-Leveraged and Back

Quite simply, an ESOP that starts out as leveraged becomes non-leveraged when the loan is paid in full.

Along the same lines, changing business conditions and obligations can lead a non-leveraged ESOP to need outside financing at some point in the future — and that would transform it, for the life of the loan, to a leveraged ESOP.

Financing flexibility is just one of the many advantages an ESOP offers to support sustainable, healthy business growth. You can learn more about the multiple advantages of employee ownership with our eBook, Key Benefits of Incorporating an ESOP into Your Business Exit Strategy. Click the link below to claim your free copy.