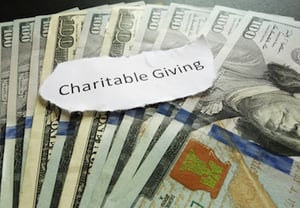 The Protecting Americans from Tax Hikes Act of 2015 (the PATH Act) was signed into law on December 18, 2015.  One item covered under the law was the permanent extension of the option to take a qualified charitable distribution (QCD).  This option, first available in 2006, allows IRA participants to exclude up to $100,000 from gross income for donations paid directly to a qualified charity from their IRA.

A QCD is a distribution from an IRA owned by an age 70 ½ or over taxpayer that would otherwise be taxable that is paid directly from the IRA to a qualified charity.

An IRA owner can exclude up to $100,000 of gross income for a year.  The amount of QCD is not included in the charitable contribution deduction determination.  The QCD can also be used to satisfy the Required Minimum Distribution requirement for the year.

As of this article, Publication 17 has still not been updated:

At the time this publication was prepared for printing, Congress was considering legislation that would extend qualified charitable distributions from IRAs.  To see if the legislation was enacted, go to www.irs.gov/pub17.

Publication 590-B (2015) provides more detailed guidance and an example:

The maximum annual exclusion for QCDs is $100,000.  Any QCD in excess of the $100,000 exclusion limit is included in income as any other distribution.  If you file a joint return, your spouse can also have a QCD and exclude up to $100,000.  The amount of the QCD is limited to the amount of the distribution that would otherwise be included in income.  If your IRA includes nondeductible contributions, the distribution is first considered to be paid out of otherwise taxable income.

A QCD will count towards your required minimum distribution, discussed earlier.

You cannot claim a charitable contribution deduction for any QCD not included in your income.