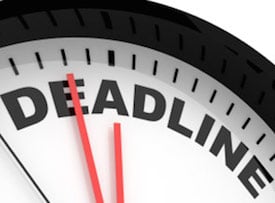 ESOPs and other qualified retirement plans require that plan participants begin taking a distribution of their retirement plan benefits after they reach a certain age. This distribution, also known as an IRS Required Minimum Distribution (RMD), is required for plan participants annually starting with the year that the participant reaches 70 ½, or if later, the year in which the participant retires. [If the account is an IRA or the account owner is a 5% owner sponsoring the plan, the RMD must begin upon attainment of 70 ½ .]

It is important for the Plan Administrator to make sure that all 2015 RMDs are paid out by the end of the calendar year.

Retirement plan participants and IRA owners, including owners of SEP IRAs and SIMPLE IRAs, are responsible for taking the correct amount of RMDs on time every year from their accounts, and they face stiff penalties for failure to take RMDs.

Generally, all participants must receive their first RMD by the April 1 of the year following the year they meet both of the following requirements: attain age 70 ½ and terminate employment. This date is referred to as the participant's required beginning date.

Each subsequent RMD is due on December 31. Another way to look at it is that the initial RMD is given an additional 3-month grace period.

Let's look at an example of a participant that attained age 70 ½ and terminated service with the company in 2015:

Another option is for the participant to take both their first and second RMDs before April 1 of the year the RMDs are due. Using the example, the first two RMDs would be taken in 2016 by April 1, 2016.

5% of the owners of the business sponsoring the plan, must begin receiving RMDs by the required beginning date, even if they are still employed.

RMDs After Death of Participant

Charitable Donation of RMDs (IRAs Only)

For eligible tax years, participants could exclude up to $100,000 from gross income for donations paid directly to a qualified charity from their IRA.

Key points about qualified charitable contributions (QCDs) include: The last day to make a QCD from an IRA was extended December 31, 2014 and The Protecting Americans from Tax Hikes Act of 2015 (the PATH Act) signed into law on December 18, 2015, permanently extending the exclusion.

The IRS has two RMD worksheets that you may find useful:

Here are two online RMD calculators you may find useful.

Another factor to consider for RMDs is that the plan may not have enough cash to pay to the participant(s) to satisfy the RMD requirements.  Should this situation arise the plan will most likely have three options:

A proper ESOP distribution policy can help avoid or manage a situation where the ESOP doesn’t have enough cash available to pay its required minimum distributions.

If you do not comply with the RMD rules, you may have to pay a 50% excise tax on the amount not distributed as required. The excise tax is reported on IRS Form 5329 - Additional Taxes on Qualified Plans (Including IRAs) and Other Tax-Favored Accounts.