S. 742: The Promotion and Expansion of Private Employee Ownership Act of 2013 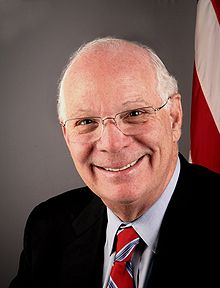 While the text of the legislation is not yet available, it appears to be modeled after S. 1512: Promotion and Expansion of Private Employee Ownership Act of 2011 from the The 112th Congress.

A press release cites Macroeconomic Impact of S ESOPs on the U.S. Economy by Alex Brill that found that ESOP Companies Have Higher Productivity and Increased Economic Resilience.  This follows 2012 research that found that Jobs Grew by 60 Percent in S-ESOP Companies Over the Past Decade compared to remaining flat for the economy as a whole.

WASHINGTON, April 17, 2013 /PRNewswire/ -- Today, U.S. Senator Ben Cardin (D-MD), a member of the Senate Finance Committee, along with Senator Pat Roberts (R-KS), introduced bipartisan legislation aimed at helping more Americans gain retirement savings and security through private employee ownership. A survey released in March by the Employee Benefit Research Institute found that 28% of Americans have no confidence they will have enough money to retire comfortably--the highest level in the study's 23-year history. In addition, a new study released today by Alex Brill, a fellow at the American Enterprise Institute and CEO of consulting firm Matrix Global Advisors, says that employee-owned companies that have employee stock ownership plans have demonstrated higher productivity and increased economic resilience despite economic fluctuations.

"Far too many Americans are inadequately prepared for retirement. Our legislation is about helping workers save by giving businesses the tools they need to create jobs and promote adequate retirement savings. It will strengthen a structure that promotes employee-ownership and helps workers build secure retirements," said Senator Cardin. "The bill also empowers businesses with the tools they need to access capital, retain workers, and hire new ones; essential to our continued economic recovery."

The Promotion and Expansion of Private Employee Ownership Act of 2013 (S.742) eliminates barriers that a business and its owners currently face in establishing a new S corporation ESOP or expanding the employee-ownership stake in an S corporation. Previous studies have shown that employees of S corporations with employee stock ownership plans (S ESOPs) have retirement account balances three to five times higher than the average 401 (k) or other defined contribution plans.

Among the provisions in the bill, which is supported by ESCA, are measures that will:

Encourage owners of S corporations to sell their stock to an ESOP, provide needed technical assistance for companies that may be interested in forming an S ESOP, protect small ESOP-owned businesses from losing their SBA certification when employee ownership of the company expands; and affirm the importance of preserving the S ESOP structure in the Internal Revenue Code. Additional co-sponsors of this legislation include: Debbie Stabenow (D-MI), John Thune (R-SD), Amy Klobuchar (D-MN), Roy Blunt (R-MO) and Mary Landrieu (D-LA).

"The S ESOP structure in particular has been shown to lead to greater firm longevity and higher wages, wage growth, job stability, retirement plan contributions, employment, and sales than would otherwise have been anticipated," said Alex Brill in the study. "S ESOPs have also proven more resilient in the face of economic distress, outperforming other private U.S. employers during the recent recession."

An ESOP is a qualified defined contribution plan that provides a company's workers with retirement savings through their investments in their employer's stock, at no cost to the worker. The Alex Brill study, Macroeconomic Impact of S ESOPs on the U.S. Economy details, in 2010, the following positive impacts:

their own employees, with $48 billion in additional income for supported

directly from S ESOPs, while output in supported industries totaled $153

The full study, Macroeconomic Impact of S ESOPs on the U.S. Economy can be found here: http://www.esca.us/images/stories/Macroecomic_Impact_of_S_ESOPs_study_4_ 17_13.pdf

"When times are tough, employee-owners work smarter and harder because of their commitment and investment in the business, and that makes us stronger," said Pete Strange, Chairman Emeritus, Messer Inc. and an ESCA member. "We applaud this legislation that creates jobs and encourages long-term retirement savings for hardworking Americans."