In our 2012 Update on ESOPs and Corporate Tax Reform we explored the upcoming corporate tax reform debate and its potential impact on ESOPs.  An Analysis of the Benefits S ESOPs Provide the U.S. Economy and Workforce, a study released by a former advisor to the Simpson-Bowles bipartisan deficit reduction commission, examines the economic impact of employee stock ownership plans (ESOPs) and finds that S ESOPs positively contribute to job creation by promoting employee commitment:

The performance of the U.S. labor market has been the subject of intense scrutiny since the recent recession. Furthermore, the deteriorating fiscal outlook, including trillion-dollar deficits and the approaching entitlement crisis, has brought the tax reform debate to the forefront. While policymakers have not reached a consensus on the appropriate level of taxation, there is an emerging consensus about the nature of a reformed tax code. This consensus envisions a tax reform whereby many, if not most, of the existing tax code preferences (formally called tax expenditures) are repealed, reformed, or curtailed. A broadened tax base would permit lawmakers to lower statutory tax rates, raise additional revenue, or both. The Simpson-Bowles Commission in 2010 invigorated political interest in this approach when it outlined reform proposals that could bring statutory rates down dramatically even while raising significantly more tax revenue.

Beyond deficit reduction, which was the focus of the Simpson-Bowles plan, tax reform holds the promise of economic growth. A broader tax base, achieved by limiting or eliminating preferential treatment in the tax code, would reduce distortions and create a more level playing field across the economy. However, not all tax preferences are undesirable because not all base-broadening promotes economic growth. The value of a tax preference must be assessed based on the positive economic returns of the activities or behavior the preference targets.

S ESOPs, for example, enjoy an important tax benefit. But S ESOPs are a proven way to cultivate employee loyalty, and worker commitment appears to enhance economic prosperity. In fact, as the analysis presented above indicates, S ESOPs have seen an increase in employment and active participants compared to the overall economy both when the economy was adding jobs and when it was in recession. These results strongly suggest that, in the context of the current tax reform debate that seeks to curtail existing tax expenditures in favor of lower statutory tax rates, policymakers should recognize the evidence in support of S ESOPs and their positive economic contribution.

Here is the press release:

WASHINGTON, July 26, 2012 /PRNewswire via COMTEX/ -- A study released today by Alex Brill, former advisor to the Simpson-Bowles bipartisan deficit reduction commission and a fellow at the American Enterprise Institute, finds that private employee stock ownership plans (ESOPs) organized as S corporations increased employment over the last decade more quickly than the overall private sector. Among surveyed "S-ESOP" companies, the Brill study reported, jobs grew by 60 percent over the past decade, while jobs in the private economy as a whole remained relatively flat.

"The unique strengths of employee ownership drove company gains and jobs in the past decade, while helping insulate S-ESOP businesses from the adverse effects of the recent recession," Brill wrote in the new report.

ESOPs are tax-exempt retirement plans that consist of company stock held on behalf of the company's employees. They are company-funded retirement plans that do not require any contribution from workers. Congress first changed U.S. tax rules to allow S corporation businesses to be ESOP-owned in 1998; today, there are thousands of S-ESOP companies in America employing millions of Americans - who are owners of their business - in every U.S. state.

KEY FINDINGS: In the study, Brill assessed the ten-year performance of S-ESOP companies through a survey of 56 S-ESOP businesses and through extensive analysis of Labor Department data from 2002-2009. He found that:

S-ESOP companies regained momentum faster than other private firms after the recession; and

Brill's study makes clear that these unusually positive business outcomes may be linked to the beneficial effects of employee ownership on private businesses, where workers are substantially more invested in the success of their workplaces because they know it will affect their own economic well-being. An earlier University of Pennsylvania study found that the success of S-ESOP companies generates roughly $14 billion in retirement savings for the workers of those businesses that would not have existed in the absence of the S-ESOP business ownership tax structure.

The Brill report comes out in the run-up to tax reform deliberations on Capitol Hill, and as policymakers sort through which of the special arrangements should remain in the Tax Code. The Simpson-Bowles Commission recommended that policymakers eliminate many so-called tax expenditures in order to address the country's fiscal imbalance. But Brill clarifies in his new report that "many tax expenditures are appropriate and effective tools for promoting economic growth or addressing negative externalities." He points to the S-ESOP as one such tool, asserting, "Policymakers should recognize the evidence in support of S-ESOPs and their positive economic contribution."

The findings are consistent with other studies that have demonstrated that Selling to an ESOP Provides Greater Employment Stability and Increases Job Satisfaction.  There is a lot of research on the subject, including recent studies that have found that ESOPs Increase Employee Wealth and Wages, ESOP Companies Provide More Sustainable Employment, S Corporations ESOP Companies are More Stable, Provide Increase Job Satisfaction and Higher Organizational Commitment and Employee Ownership Increases Job Satisfaction, Innovation, and Productivity. 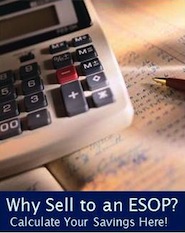